Stella finally found her first truffles in the wild, unaided by me, all thanks to Alana McGee, owner of Truffle Dog Company. Tomorrow we go out again, and again and again, because truffle hunting is a team sport. My job is to encourage Stella, to know when she is telling me where the truffle is, and to be able to find it myself. They are hard to see in the forest duff, and meanwhile Stella is off looking for another one as I sift through the dirt.

Did I ever tell you the story of how I got Stella?

I was in Port Townsend, feeling sorry for myself because I was lonesome on the farm, and my friend Michele suggested getting a dog. I had never had a dog, being very allergic to them, but I was willing to try. About that time a pair of beautiful curly dogs came walking down the sidewalk right in front of us. "Those look like Portugese Water dogs", Michele said, "and they are hypoallergenic!" We stopped the owners and soon found out they were Lagotto Romagnolos, even more hypoallergenic. I asked if I could bury my face in their fur. This I did for a few minutes, with no reaction. Patti Fischer and her husband Leonard were very obliging, and said they had just gotten the female and were thinking of breeding her with their intact male. I gave them my card, and said if they decided to breed them, I would like to buy one. Three months later they called me from their home in Sequim and let me know I was third in line for a pup. 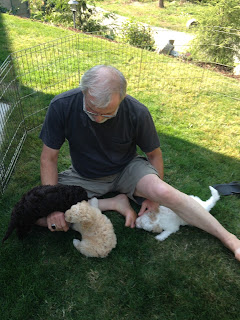 In August, when the puppies were 6 weeks old, I was asked to come to Sequim to choose one. I had been trying out Italian names all summer, and settled on Fabrizio if it were a boy, from the movie 3 Coins in a Fountain, where Jean Peters, astride a Vespa, waves her hand as she zooms off, saying "Arrivedella Fabrizio!" If a girl, Stella, for the wonderful character in Tennessee Williams' "A Streetcar Named Desire".
Once there, two pups out of the litter of six held my attention. Both apricot colored, the boy was the breeders' choice for me, but the girl wanted me. I could not make up my mind, but had to, since all of the puppies were sold and needed to be chosen. We decided to stay in Sequim for the night, in case I wanted to come back in the morning. I said I would sleep on it, and know by then. At the hotel, after dinner, it was 9 o'clock when I turned on the tv. It was tuned to PBS, it was Saturday night, and it took me a minute or two to realize that the film playing was "A Streetcar Named Desire". Whoa, must be a sign!. I had not seen that movie in 20 years. Suddenly the nighttime downtown scene of flashing neon lights filled the screen, and there, at the top, was the word "Riley's", in big, flashing lights. I picked up the phone and called the Fischers. Stella was my dog.