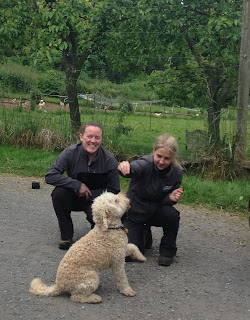 The founders and owners of The Truffle Dog Company, Alana McGee and Kristin Rosenbach, visited Nettles Farm last weekend. The purpose was to see if, even in the drought we have had all May, we could find some truffles on and near the farm. They brought out their trusty dogs, a Lagotto and an Australian Shepherd, and off we went. Several areas were likely spots, but we found them in only two. Altogether we found 3 truffles, a minor miracle given the dry soils everywhere we looked. 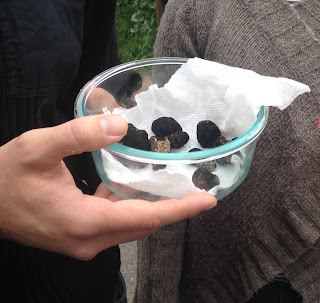 Now we are taking the online truffle class that they offer with  earnest desire and a solid goal: Stella will become like her ancestors of 600 years ago, a truffle hunter!

Posted by Riley Starks at 7:13 PM No comments:

Email ThisBlogThis!Share to TwitterShare to FacebookShare to Pinterest
The work I have been doing with Poulet Bleu and chicken workshops received some recent press: The Wall Street Journal just after Christmas, and The Huffington Post two weeks later.
I got a puppy in September, a Lagotto Romagnolo named Stella (the truffle Smella), named for the character in A Streetcar Named Desire. STELLLL-A!!! We are training each other in the art of being and having a dog.....neither one of us has been here before.... and the learning curve is steep. I enrolled her in a truffle hunting class, which we are just beginning. I went truffling with a fellow named "Animal", a forager with a Lagotto named Austin. We found $100 of good black and white truffles (he had a drug truffle scale, $20/gram) over an hour of trudging through underbrush in the pouring rain, in a public forest near Issaquah. The drive back home was infused with the warm, comforting aroma of truffles, so pleasant I was surprised by the experience.This quickly inspired me to get serious with Stella.

The goats have found a new home. Rosy was going after Stella. Nico was going after all children, lately with more purpose. They are together on a hobby farm in the county. I miss them and so does the feral cat that, unbeknownst to me, was living with them on the sly. I have been feeding the cat for the past year and a half, hoping to make friends with it (you can see I was lonely...I hate cats), and it would show up unexpectedly and I would put the food bowl closer and closer to my back deck. It was so skittish that if I looked its way it would bolt. Finally, the cat, whom I named Cosette from Les Miserables, because she was definitely a survivor, allowed herself to eat from the bowl on the deck. When I rehomed the goats, Cosette started showing up more and more, and I would see her in the goat pen wandering. She spent a lot of time with the chickens, too, and I finally realized that she had been spending all of her time on the farm, with the animals. When I got Stella, Cosette could not get enough of her. Over a few months Cosette, who turns out to be a boy (he must have been just a kitten when I first fed him), continued to engage Stella and to be passive and inviting. The result is that they are best friends, and all without a single word being spoken!

I hope you find the time to come for a restful stay sometime soon! We'll all be waiting.
Posted by Riley Starks at 6:26 PM No comments: