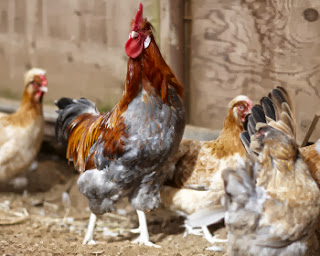 Dante, also known as Raphael by his hens, and who answers to neither name, is the sole rooster in charge of 40 laying hens. He is a Sulmthaler, and must weigh 12 lbs. He is a good rooster, and takes his job seriously. Whenever a dispute breaks out between 2 hens, which is often, especially with Plymouth Barred Rocks, Dante rushes from whatever far corner of the fenced area he occupies to get between the battling hens. He finds the highest perch he can, usually in a fruit tree in the yard, to oversee his domain. His crow is loud and clear, leaving no doubt that he is in charge.
One day a few months ago, before the unfortunate incident with Pico the hen, the young goshawk had the audacity to attack one of the hens. Now these hens are large birds, easily weighing 8 lbs, and the hawk could not have been more than half that size. But still he rocketed down from a nearby perch and landed on the back of the Barred Rock. Dante instantly came running like a giant orange ball of fury, and shoved the hawk off the hen. The hawk, feathers obviously ruffled, flew back to his perch, before swooping down on Dante when his back was turned. The hawk clawed all the feathers from poor Dante's back, but was no match for the giant rooster. Dante upturned the predator, and chased him from the yard.
That was almost Dante's final effort though, for he was so weak he could walk only by using his wings as crutches. With all the strength left in him, he made it to the coop door and safety, his back bleeding profusely. As proud as he was, when I detached the automatic waterer and put it in front of him, he drank gratefully. The hens, being hens and not knowing any better, began pecking at the red blood and would have finished the hawk's job unknowingly if I had not put a plaster of coal tar all over his back.
Days later, Dante could barely get around. Instead of roosting high overhead in the coop with a few of his favorite hens, he stayed alone on the floor, his head pressed into a corner out of shame. In the following video, taken a few days after the attack, he still is so weak he slumps to the floor to eat his grain. Crowing is out of the question, as is flying or even climbing up to a roost.

Now, a month later, Dante is back on top, crowing, perching from on high, and warning of danger as he has always done. Well done, Dante the Warrior!
Posted by Riley Starks at 11:54 AM 2 comments: 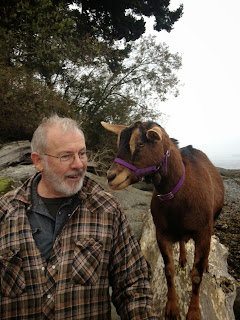 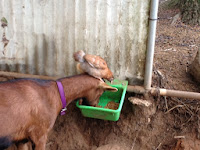 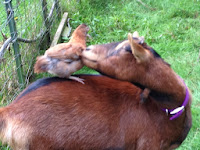 This went one for about a month, and Pico had grown from a small chick into a healthy adolescent. She traveled everywhere on Rosie or Nico's back. This did not go unnoticed by a young goshawk who had been terrorizing the layers and other hens around the farm. Normally we do not see goshawks here, as their habitat is usually north, but occasionally one will join the ravens and eagles that give an interested flyby when they hear the sound of young chickens. One day, while I was inside working, the hawk swooped low and snatched Pico right off of Rosie's back. Rosie froze as she heard her little friend crying through the trees, then silence. That was almost a month ago, and still Rosie seems traumatized. She is hesitant to leave her pen, and for the longest time looked in vain for Pico, with a caring and bewildered look in her soft eyes.
Posted by Riley Starks at 11:10 AM 11 comments: